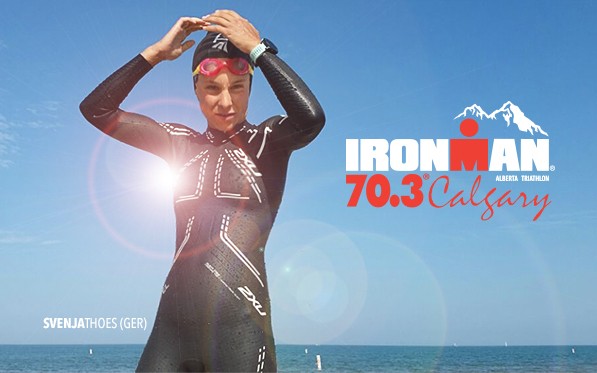 The German professional triathlete Svenja Thoes (TEAM SPORT FOR GOOD) will be competing for the second race on her North America tour this weekend. After her convincing IRONMAN® 70.3 debut in Racine (Wisconsin, USA), the 26-year-old athlete is starting over the IRONMAN middle distance in the Canadian city of Calgary.

But it seems that in Canada the weather caprices will influence the competition, so it could be again an exceptionally exciting race. While in the USA the swimming was canceled - due to the almost icy water in Lake Michigan, in Canada, according to the organizer a critical smog / smoke could force an interruption or cancellation. "We continue to monitor and react accordingly. We take the athletes' health seriously”, the organizer said in an official statement.

Thoes, who is ranked for the first time in the "Ironman Kona Qualifying" list after finishing fourth in Racine, is looking forward to making another step forward in Calgary.

On the ultra-fast track, in front of the mighty Rocky Mountains, she wants to conquer the podium, but also make a clear leap into the leaderboard.  "Although I have finally made one competition in my brand new professional career, I want to reach the double-digit range of the professional list as quickly as possible and a podium place here in Canada would be ideal," said the ambitious rookie from the triathlon TEAM SPORT FOR GOOD.

Thoes must have the experienced American Heather Jackson and the two 70.3 specialists Lesley Smith and Jennifer Spieldenner in her mind and under control to get under the Top Three in this race.

The revised bike course is flat, with only 275 yards in elevation gain over the 56 miles course, so it is very shallow and extremely fast, it remains to be seen if Thoes, as announced in Racine, will get her temperament under control or if she will give full throttle again from the start.

It is highly likely that a special spectator group will not care: the administration of the city of Calgary has announced that 200 goats "will be used for some natural grass treatments" on some meadows during the competition season. This extremely uncomplicated handling with the event “Ironman Triathlon” is also fitting to the memo for the athletes that there will be no traffic-regulating barriers on the bike course.